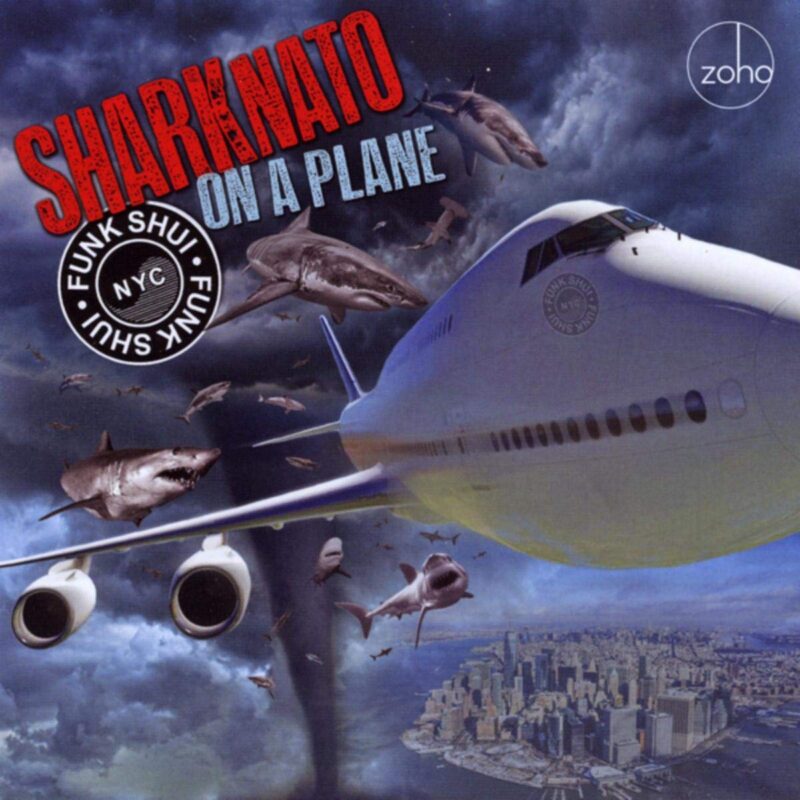 New York City can be loud, dense, and funky. It can make you smile and want to dance. It also has a unique beauty and energy. Funk Shui NYC plays music that represents this great metropolis. Listeners hear in the first note that the band enjoys playing together. After several years of playing in groups as sidemen, we – Dave Morgan and Rob Susman – saw an opportunity to make our own music that was current, relevant, intricate, and a blast.

We were able to attract players who are technically skilled and creatively minded. Oh yeah, we also didn’t want to be so serious all the time. Funk Shui NYC is an ‘all-star band’ in the sense that its members have impressive performing credits, but the roster wasn’t selected for status. The musicians are our friends, collaborators, and each other’s fans. After a few years of playing in New York City night clubs, we decided to record some of the material. On Funk Shui NYC’s ZOHO debut recording, Shark NATO on a Plane, you will hear new compositions, arrangements and solos that represent the pride, joy and humor of Funk Shui NYC’s members.

Shark NATO on a Plane: Composer Rob Susman started with a pun laden title before any music was written. Inspired by Hollywood film comedy horror, its content is exaggerated until it reaches a farcical climax. The 1950’s style radio jingle theme rhythmically turns on itself. The groove blends Latin, Rock and odd street beat rhythms. It’s like Bo Diddley playing a Greek Wedding. This is a danceable tune if you don’t think too much. Dave Morgan on baritone sax and Rob Susman on trombone are the soloists.

What Barney? (The Barney Miller Theme): The melodic line from the long running television series Barney Miller is one of the most iconic themes for electric bass players, although it bears a striking resemblance to a riff at the end of James Taylor’s “Rock and Roll is Music Now”. Set to a hip-hop beat, the material has been inspired by “Barney” and also by brief quotes from Miles Davis’ trumpet solo from ‘So What’. The soloists, Dave Morgan on baritone sax, Noel Cohen on guitar, Stan Killian on tenor sax, and Seneca Black on trumpet gradually take the feel from Hip Hop to Rock to Jazz to…something else?

Summertime: This George Gershwin tune is one of the most iconic standards in the Great American Songbook. Trumpeter Chris Anderson arranged this piece starting with a Santana style Latin Rock beat that morphs into a traditional Conjunto. John Isley plays the tenor solo followed by Chris Anderson on trumpet. The rhythm section shows off some Latin music street cred as well.

Into the Fourth Dimension: the title is a double entendre, conflating the musical interval of a perfect Fourth and the notion of traveling to another element of time and space. Are those two things really that different anyway? Rhythmic rigidity and free Jazz went on a blind date. Composer Rob Susman originally wrote this is as an homage to mid-century sci fi movies and television shows but is also a vehicle for trumpet soloist Seneca Black and the dynamic rhythm section.

Rock Bottom: Guitarist Noel Cohen invited Rob Susman to do some writing. Noel had more ideas than Rob could keep up with. The Edgar Winter ‘Frankenstein’ inspired opening, hard driving main riff and Allman Brothers influenced Afro-Cuban rock section exist in a marriage of Noel’s gift for melody and Rob’s skills as an arranger and orchestrator. Chris Hemingway on alto sax and Noel Cohen on guitar are the soloists.

Blue Jay Way: We all need to go on a magical mystery tour once in a while. George Harrison’s 1967 psychedelic masterpiece blurs the lines between major and minor chords and somehow puts the fog of being semi awake into musical terms. This arrangement by Rob Susman features a trumpet solo by Chris Anderson, a funky lounge groove, Hindustani tablas, and of course a bit of psychedelia. Rob Susman is the trombone soloist.

I Feel Free: a “live” crowd pleaser, arranged by Dave Morgan. A tribute to the late, great Ginger Baker – a state of mind articulated by lyricist Peter Brown – a perfect setting for Seneca Black’s lyrical lead trumpet playing – a chance for a little saxophonic doo-wop – a bonfire of dueling alto saxes Chris Hemingway and Charles Lee; I Feel Free is all of these! Opening with Dave’s bari sax groove and closing with a little Funk Shui NYC vocal, “I Feel Free” is designed to let us do just that.

Everything I Do Gonna Be Funky: Allen Toussaint gives us life coaching by example with this song. In this retro lounge inspired arrangement by Rob Sussman, Rob plays the catchy title chant on trombone and is soon joined by section mate Scott Burrows. After a conversation between the two trombonists, Rex Benincasa and Peter Grant show off their funkiness on percussion and drums respectively.